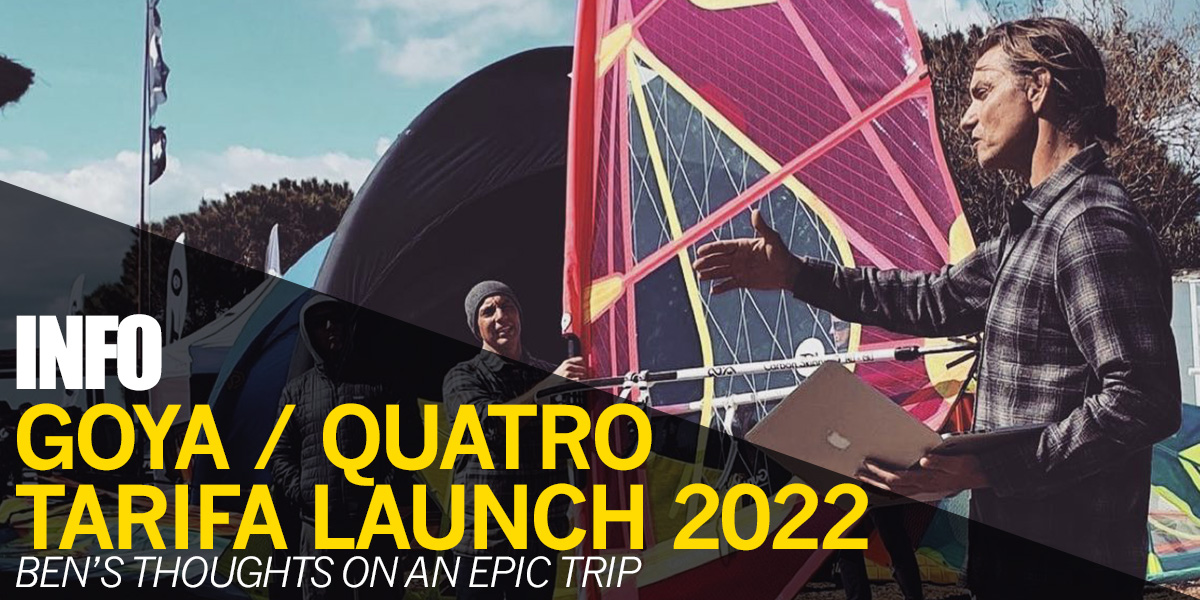 As all the lock downs and travel restrictions have stated to be lifted, myself and Rick were able to jet off to the Goya Dealer trip in Tarifa, to check out the all new Goya/Quatro kit for 2022. Goya are continuing on with the two year cycle for their sails and because of the extended selling period this has allowed Jason Diffin the extra time to revolutionise the current range.

If you have been following Goya for the last few years you will have seen that the Eclipse, the king of power was removed from the range. This 5 battened wave sail was missed throughout the lands and was called back after the great demand with some sailors still holding on to their 2015 version of the sail. After trying the eclipse I can say that they really have brought this sail back to life. The stability is incredible and it felt really light in the hands throughout manoeuvres. The new Eclipse works well in huge wind ranges with the ability to catch the light winds and control through the gusts. Lightweight materials in this sail means the extra weight of the batten doesn’t compromise the weight.

If you are a windsurfer looking for a 5-6m cross over sail which isn’t just a dedicated wave sail; your prayers have been answered. In the larger sizes the Eclipse will partner perfectly with your freestyle wave boards which thrive in trickier conditions when the wind isn’t always blowing straight.  Larger wave riders will benefit from the extra batten as it gives the sail lots of belly meaning it’s a very full cut compared to a flatter sail such as the Banzai.  In the smaller sizes the Eclipse is a wave weapon with stacks of power to propel you though jumps and turns.

Windsurfing isn’t sustainable as there are lots of plastics and chemicals used in the production of kit. Goya’s ethos is to keep our playgrounds clean. They are doing this by continuing their two year cycle of sails and this means that when new sails come out they are not just a colour change, they have been improved. This also means people keep hold of their sails for longer and keeps more value in your sails.

Durability is one of the main driving forces behind Goya sails. Durability usually means heavy sails which isn’t good. Goya sails have never been the lightest sails on the market compared to other brands but made up for this in performance and durability. This has all changed! Goya sails are now one of the lightest sails on the market, this was recently proven in the windsurf mag when they ranked second lightest only behind a sail which cost four figures! 300-400 gram reduction might not seem like a world changing figure. However, this weight has been taken out of the key areas in the sail such as the clue and head of the sail. This therefore reduces the swing weight, giving the sail a super crisp and responsive feel that Goyas are known for but with the figures to back it up.

Not only have the sails improved in terms of performance but I think we can all agree they’re now very eye catching. Goya have chosen to go for super fluro colours which not only look great, make you stand out on the water which of course looks great for the camera but also increase the safety of your riding. Being easier to spot can’t be a bad thing.

What you waiting for drop us a line and we can get you sorted and on the water in no time!