Swimming Wetsuits: Our guide to choosing your perfect suit

Choosing an Inflatable Paddle Board | Our Guide January 8, 2021

Choosing Your Snowboard: Which profile and why? January 6, 2020
Latest

Whether your passion is open water swimming or you’re a pro level triathlete, selecting the correct wetsuit is critical to your comfort and performance.  The available range can be overwhelming, with each brand taking a unique slant on the challenge of creating the perfect suit.  So what are the main areas to consider?

Our staff would argue that flexibility is the key to creating a successful swim suit, affording freedom of movement so as to ensure your energy is translated into efficient propulsion.  This is especially important during longer distance events but even at sprint distance nobody like to be restricted by a tough inflexible wetsuit.

The interesting thing to consider is how to create flexibility.  It comes down to the fabric quality but also panel shape and layout.  The importance of the latter is often underestimated but because horizontal seams hinder neoprene stretch they should be avoided and especially in the side panels.  Ultimately, thinner neoprene is more flexible so look for suits that have 2mm and under in the shoulders and under arms.  Given the nature of the swim stroke we emphasize the importance of flexibility in the upper body more than the lower.  Don’t forget the quality of the base fabric is also critical and not all 2mm neoprene can be considered equal.  At the top of the neoprene spectrum is Yamamoto.  This Japanese brand began producing in 1961 and is widely regarded as offering fabrics with the optimum balance of flexibility, buoyancy and durability. Their range is graded by number, starting at 38.  It is not so simple as to say the higher the number the better quality the neoprene, as each level has distinct traits.  Most swim and triathlon suits use grades between 38 and 40, the latter offering marked improvements in flexibility and buoyancy.  One nice thing about Yamamoto is that their fabric is derived from limestone and thus an easy selection for the eco minded. 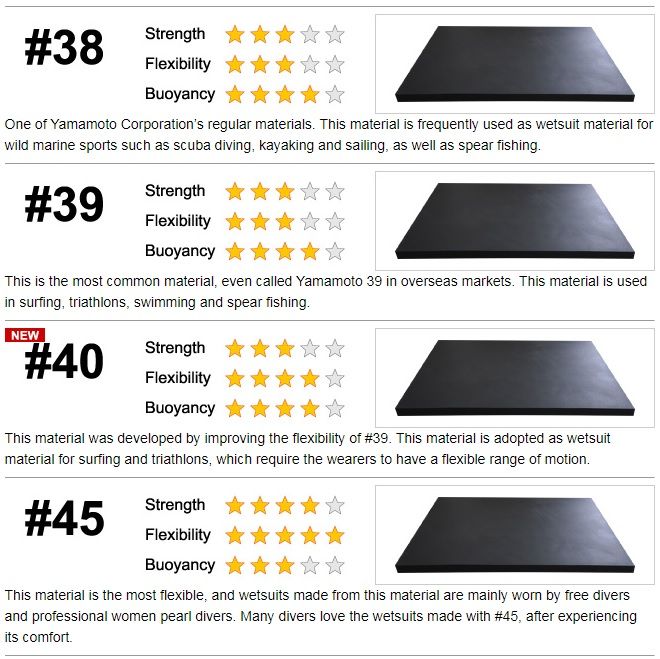 Aside from looking at the thickness and type of neoprene used in a wetsuit it can be difficult to ascertain how flexible a suit when buying online. As such, why not get in touch for advice tailored to your scenario, or even better pop into the store to feel the fabrics quality for yourself.

After the flexibility, buoyancy should be the next consideration.  Many swimmers will know the challenge of maintaining good posture and an efficient position in the water.  Let your legs sit deeper in the water and you will create more drag and work harder to propel through the water.   While there is nowhere to hide from imperfect technique or fatigue in the pool we’re pleased to report that the current range of wetsuits can help in this regard.  This is not to imply you can slack in training by relying on your latest purchase.  Instead, the inherent buoyancy in the suit will allow you to come out of the swim in the shortest time and having minimized energy expenditure.

The buoyancy of a suit comes down to neoprene thickness, quality and panel layout.   Rules set out by triathlon’s governing body dictate that manufacturers are not permitted to exceed 5mm in any area.  As these buoyant panels will be less flexible than their 2mm counterparts they are positioned in the lower body where freedom of movement is less critical.  This works perfectly given that the main area in which a swimmer loses form and increases drag is in the legs.  You will therefore see the thickest panels being concentrated from belly button to knee.  Below this, the neoprene is made thinner once again to ensure flexibility and rapid removal in transition.

In addition to making neoprene thicker in order to increase buoyancy the very makeup of the fabric is very important.  As neoprene is closed cell it has lots of tiny air bubbles built in, with more premium versions such as Yamamoto 40 having greater aeration and thus buoyancy.  In contrast, an entry level fabric will have a dense structure and so less floatation.  Once the 5mm thickness limit is reached brands then have to become creative in ways to further increase buoyancy without breaking the rules.  One common way to do this is the use of a super aerated fabric called aerodome.

This specialist neoprene, again from Yamamoto, has a honeycomb of large air bubbles built in, both to improve float and heat retention.  You can easily determine aerodome panels in a wetsuit by the textured surface. 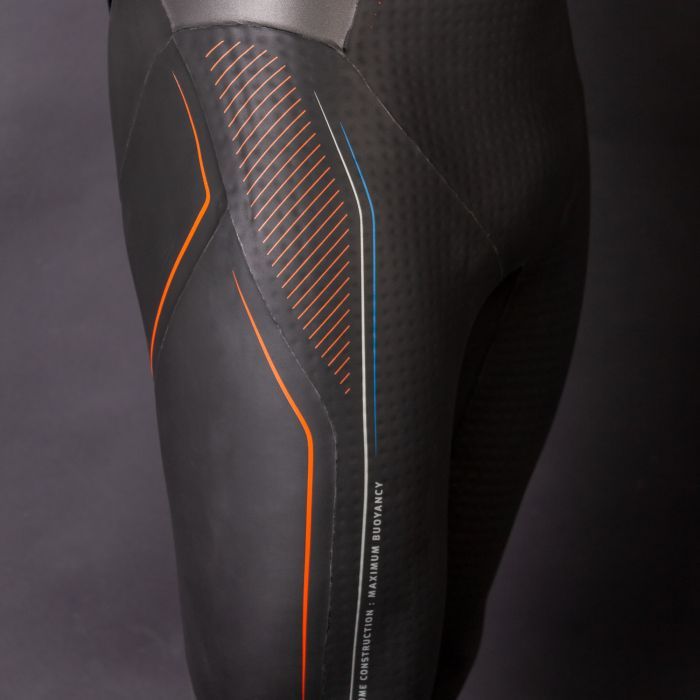 * smooth side panel vs aerated aerodome

While it is fair to suggest the majority of swimmers would be quicker through the water in ultra flexible suits using buoyant fabrics such as Yamamoto 40 and Aerodome it is important to consider your own swim stroke and relative proficiency.  For instance, if you plan to swim breaststroke then the top end suits will generally do you a disservice by bringing the legs too close to the water surface and thus heavily arch your back.  This can be uncomfortable when swimming more than a few hundred metres and in this scenario your priority should be flexibility but not buoyancy.

One area of suit design that is universally accepted as beneficial, independent of technique, is the application of low drag coatings.   Our range of swim suits will offer less drag through the water when compared with human skin and thus you will glide a greater distance per stroke and ultimately expend less energy.  The low drag coating can come under various brand names, with Super Composite Skin (SCS) being the term used by the world renowned Yamamoto factory.  Zone3 use this in their Aspire and Vanquish models and have a very similar finish on Advance and Vision models.  The latter two are not produced from Yamamoto neoprene and thus cannot hold the SCS terminology, instead known as ‘speedflo’ coating.  The final thing to consider is whether the coating is applied to the entire suit or only a portion.  Each brand will signify this but the ideal scenario would be to have your entire body, arms and legs coated in this time saving technology.

We hope the above blog has enabled you to gain a good appreciation of what makes a great triathlon wetsuit and what is to be gained by increasing your budget.  In summary, as you move up the range the suit will become more flexible, buoyant and efficient through the water.  You will be able to swim further and faster, with less energy spent but in greater comfort.  This information can be universally applied to any brand but we thought it useful to cover some specialist brand specific features in detail:

1) BRS – Certain models, namely our Zone3 Vanquish, use BRS fabric arm panels.  Rather than the traditional 1.5-2mm neoprene BRS is just 0.3mm.  This is the material used in record-breaking swimsuits that are now banned in pool competitions.  The benefit is an ultra low drag finish and weight reduction.  BRS offers great heat retention for such a thin fabric and greater feel for those seeking the perfect swim technique.

2) Pro Speed Cuffs – A feature specific to Zone3 is the pro speed cuffs.  As opposed to an SCS or speed-flo coating they use a silicone finish in the ankle and wrist panels.  As well as being very flexible this ensures these areas are incredibly slippery and thus come off without issue during transition. 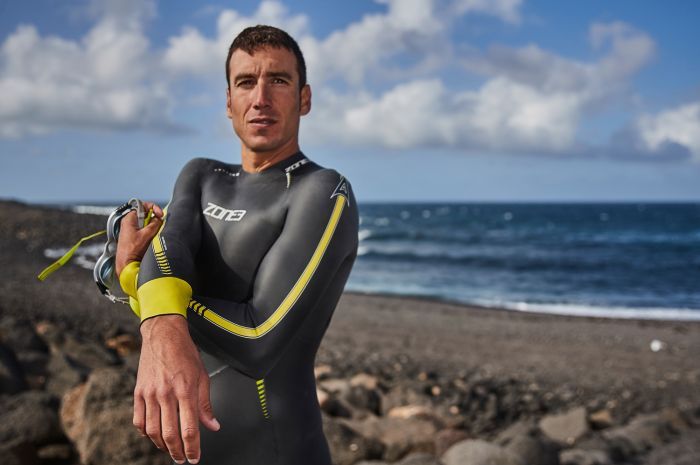 3) Lycra cuff panels – Certain brands use a lycra wrist panel as opposed to neoprene or BRS, called ‘sensory catch panels’ by Zone3.  The concept behind this design feature is to reduce weight and improve water feel.  This is beneficial to swimmers looking for the perfect technique.  A secondary benefit is in warmer conditions, as having water directly against the skin allows efficient heat loss so as not to overheat. 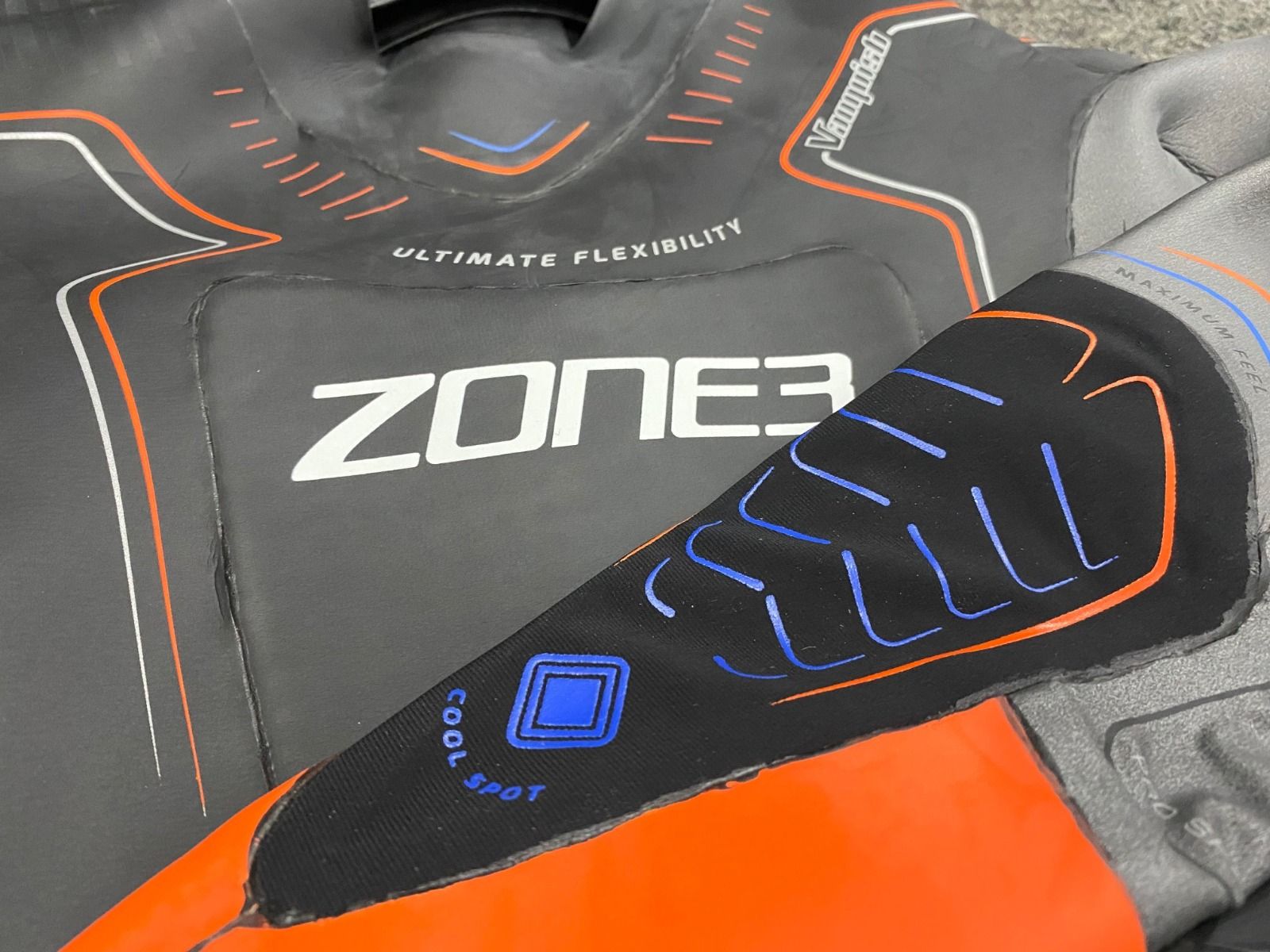 Thanks again for taking the time to read this information.  If you need further help or would like a bespoke recommendation for your next suit please simply contact us for advice.