Aquaglide Deschutes Inflatable Kayak | The latest addition to our range

An Exclusive Look At The 2022 Quatro Range By Robin Hood Watersports January 11, 2022 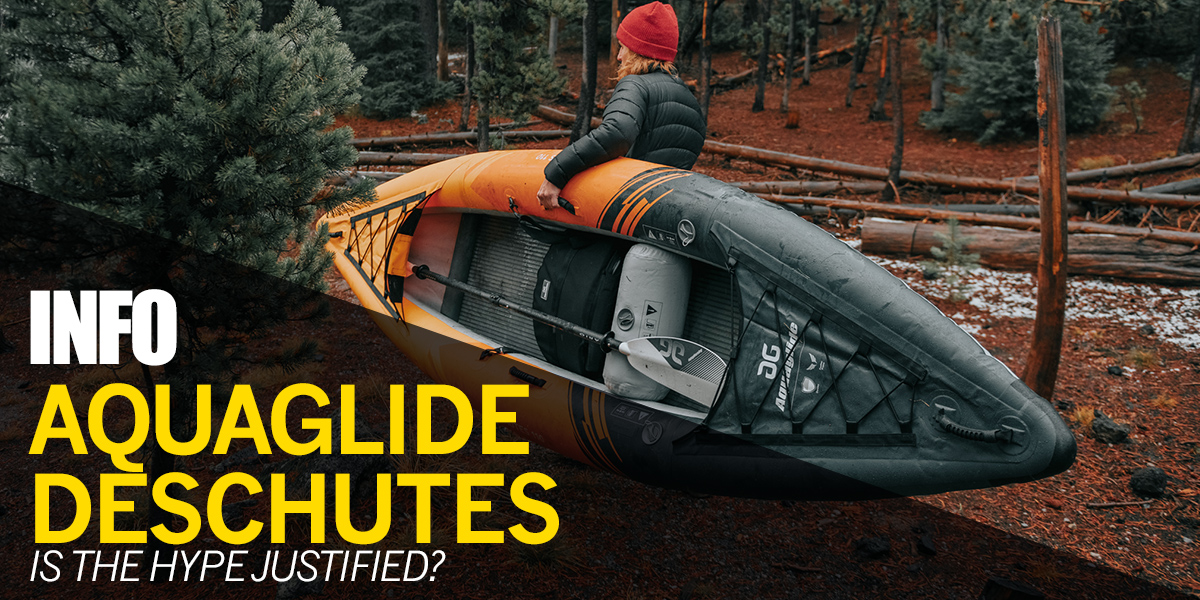 As a store working very closely with Aquaglide UK, our staff members were asked to give our opinion on the first Deschutes into the UK as far back as Autumn 2019. What is interesting about this boat is that while almost all inflatable kayaks have a blow up floor, the Deschutes uses foam. We don’t mind admitting that we were initially sceptical! After all, the gull rigidity is absolutely fundamental to the way a kayak paddles. Lose pressure here and you traditionally find a lack of forward speed, glide, and flex that could lead to a wet bum! To combat the potential performance losses Aquaglide have made two critical design changes. Firstly, the side chambers are single skin and high pressure, using their duratex reinforced pvc and the most coveted Halkey Roberts valve. The resulting psi figure is nearly double that of most inflatable kayaks. Secondly, in a move inspired by white water rafts, the Deschutes features inflatable thwarts that brace the side chambers. The consequence is a stiff boat that performed beyond all expectations during our test. It’s fair to say that our staff paddlers, many of whom have spent over 20 years on the water, were converted. Not only was the Deschutes well mannered, it was also the fastest of any of Aquaglide’s updated 2020 models. Seriously impressive!

One questions we are regularly asked in relation to all inflatable kayaks it what is included as standard. It has been a problem, with alternative brands failing to include critical items such as carry cases. No such problem here, purchase the Deschutes from Aquaglide and you will receive:

Footrest (two in the case of the 145 tandem) 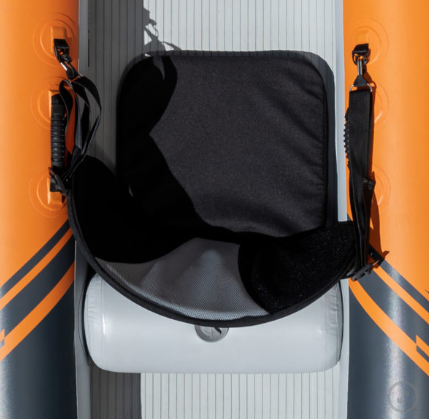 The Deschutes comes in three size configurations as follows:

Deschutes 110 – The 110 simply stands for 11ft and is best used solo. Although the smallest kayak in this range it is important to stress that 11ft remains an efficient length and there any several shorter boats that claim to be for tandem use.

Deschutes 130 – This 13ft variant is again designed for solo use. This time you benefit from increased leg room, which can be useful for taller paddlers. Similarly, those looking to paddle greater distances, or potentially include an overnight stop, will find this size useful for kit storage.

Deschutes 145 – The 14.5ft tandem is the ideal choice if you will head out with friends and family. 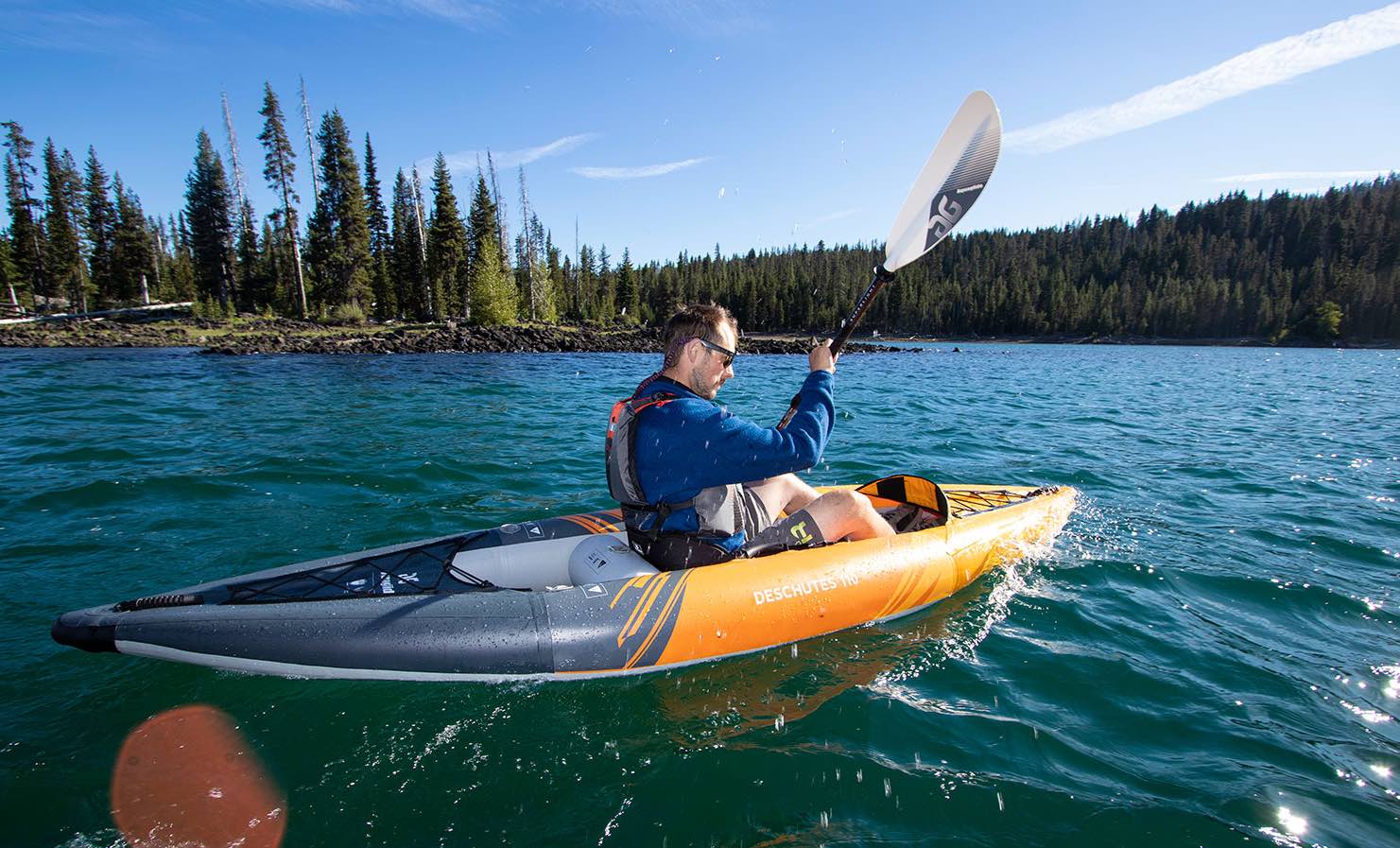 There is a great deal to praise once the Deschutes takes to the water. The low rocker profile and tapered shape make it extremely efficient, allowing you to cover distance with ease. This is not simply a mirror flat cruiser though, you will enjoy paddling both inland and coastal waters. The integrated bow splashguard reduces water ingress, while internal drain plugs allow you to quickly shed any water once back at the beach. Traditionally, straight line tracking has been the main challenge facing inflatable kayaks. There is no getting away from the fact all models using this construction will sit higher in the water compared with rigid alternatives. In doing so you will be more affected by wind. The long waterline and flat rocker of the Deschutes goes some way to counter this. As an added bonus Aquaglide provide a clip on tracking fin, which you will find especially useful when paddling in conditions where the wind is from behind or to the side. 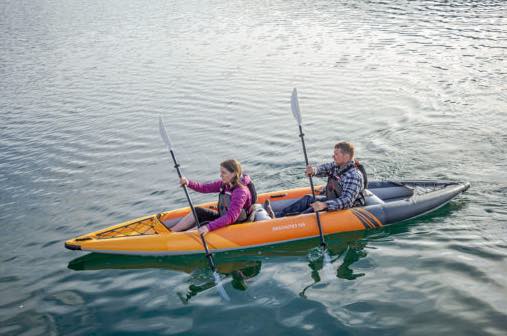 Aquaglide have bowled us over with their latest Deschutes model. The majority of our customers are interested by inflatable kayaks that prioritise exploration and adventure before wild rapids and surf. If this matches your scenario then the Deshutes is an excellent choice. As well as affording excellent performance the new foam floor construction has obvious benefits in terms of carrying weight and pack size. Anyone looking for a lightweight and extremely compact inflatable should take note. However, we do not believe this comes at the expense of durability, as can often be the case with stripped back designs. The Deschutes retains the quality you would expect from such an established brand and we’re certain it will lead to many happy memories with friends and family. 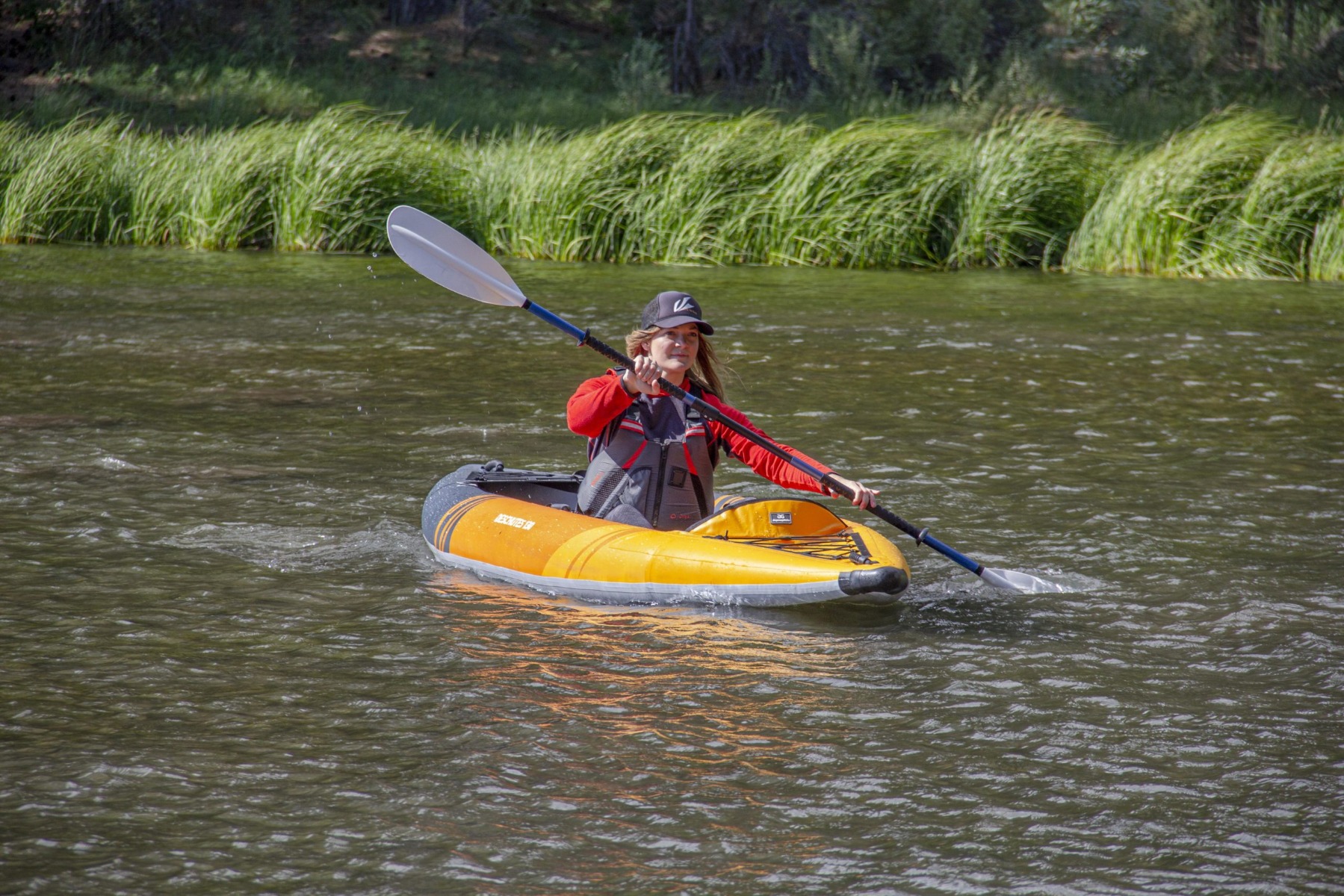