Choosing an Inflatable Paddle Board | Our Guide January 8, 2021 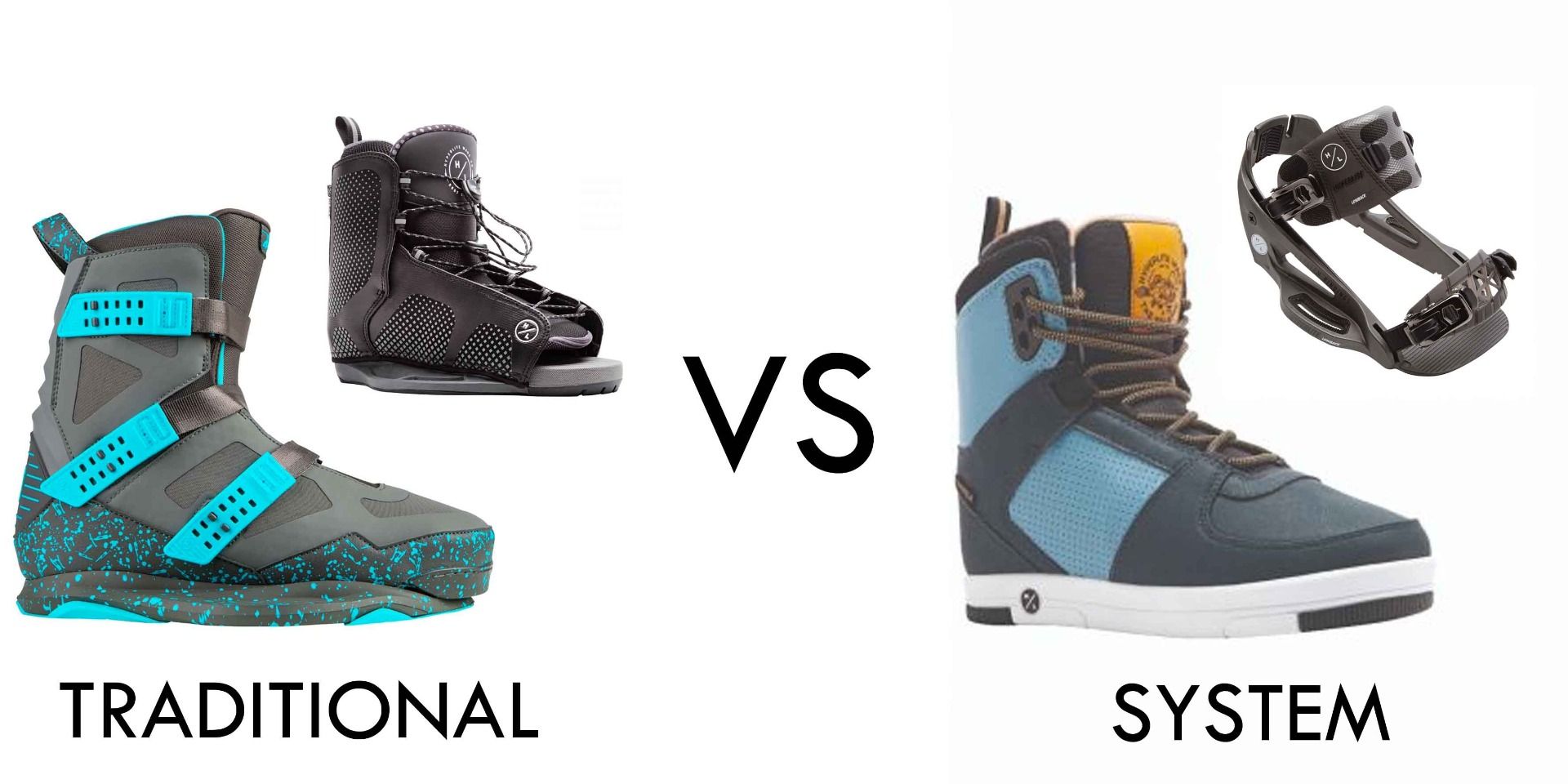 As the name suggests this category of wakeboard bindings make up 90% of the market and have been used since the inception of the sport. This wakeboard boot style bolts directly to the board using two screws and remains in place while riding. Therefore, you take the board and boots off as one so will generally end up barefoot. In recent times there are a few exceptions to this statement but these will be covered in detail later.

The traditional boot is a rigid chassis combined with soft flexible upper, the latter being either glued and/or stitched to the former. They are tightened via a number of methods, including by not restricted to the following: 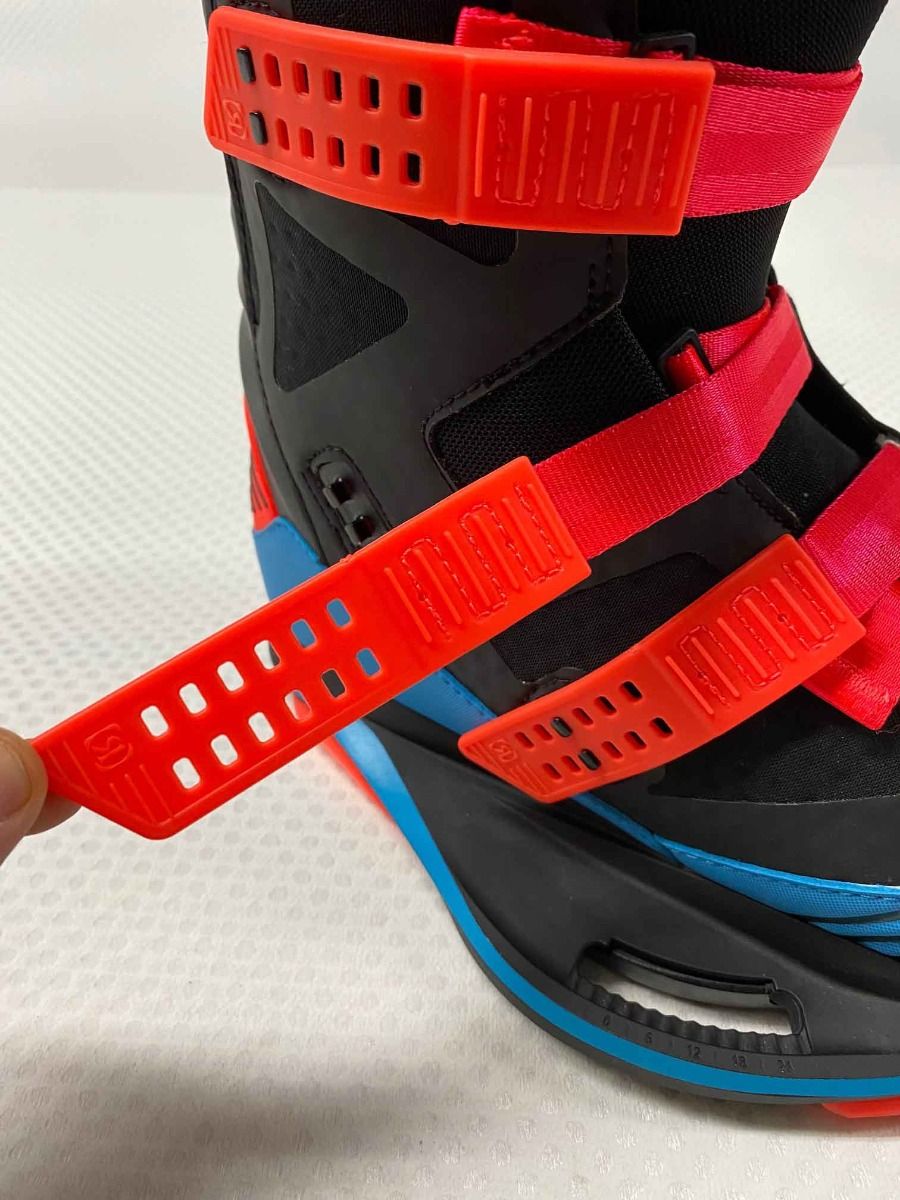 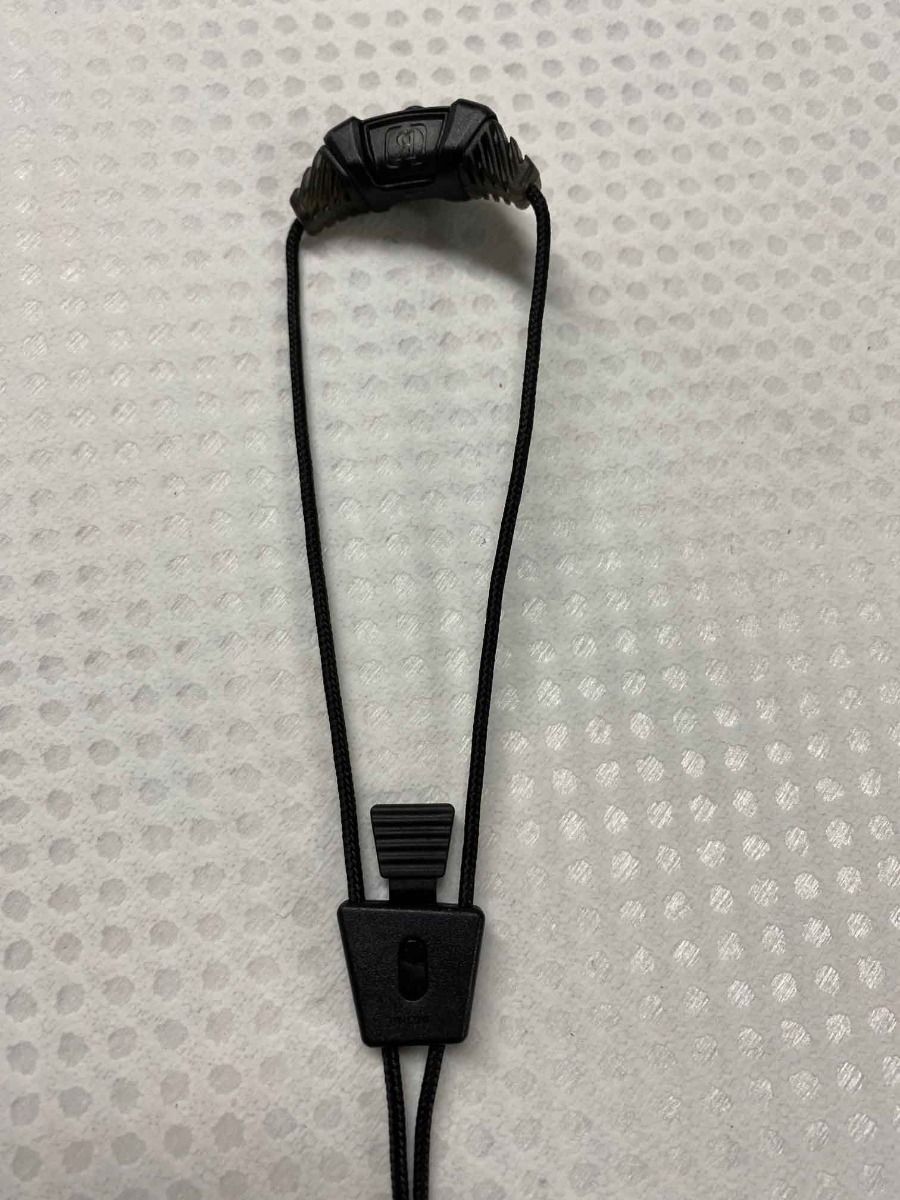 Speed laces using lace locks are the most common closure method in recent times and allow you to get the boot very tight, thus affording great board control. The boot must be a snug fit so that rider movements are correctly translated into the wakeboard. If there were a downside to lace/lock systems it would be that their function is highly dependent on the lace diameter and over time the lock can wear the lace slightly, leading to slipping locks. However, fear not as laces and locks are readily available and easily replaced. We would generally expect an enthusiastic boat rider to change these once per season at an approximate cost of £20. In contrast, cable riders will be heavier on boots in terms of wear and tear simply because they will be in and out of the binding much more frequently than those who wakeboard behind a boat or jetski.

As a general rule we would recommend looking to models that include separate upper and lower zonal lacing, allowing each section to be tightening independently. This allows you to get the correct tension around the ankle, which is critical to board control. In contrast, boots that have a single lace system tend to result in tension around the top of the boot while being slack at the base. Velcro bindings can be popular at the cables given their durability and speed of entry and exit.

Traditional bindings can be further subdivided into open or closed toe.

Open Toe - With these models the clue is in the name and the binding is open so toes are exposed. 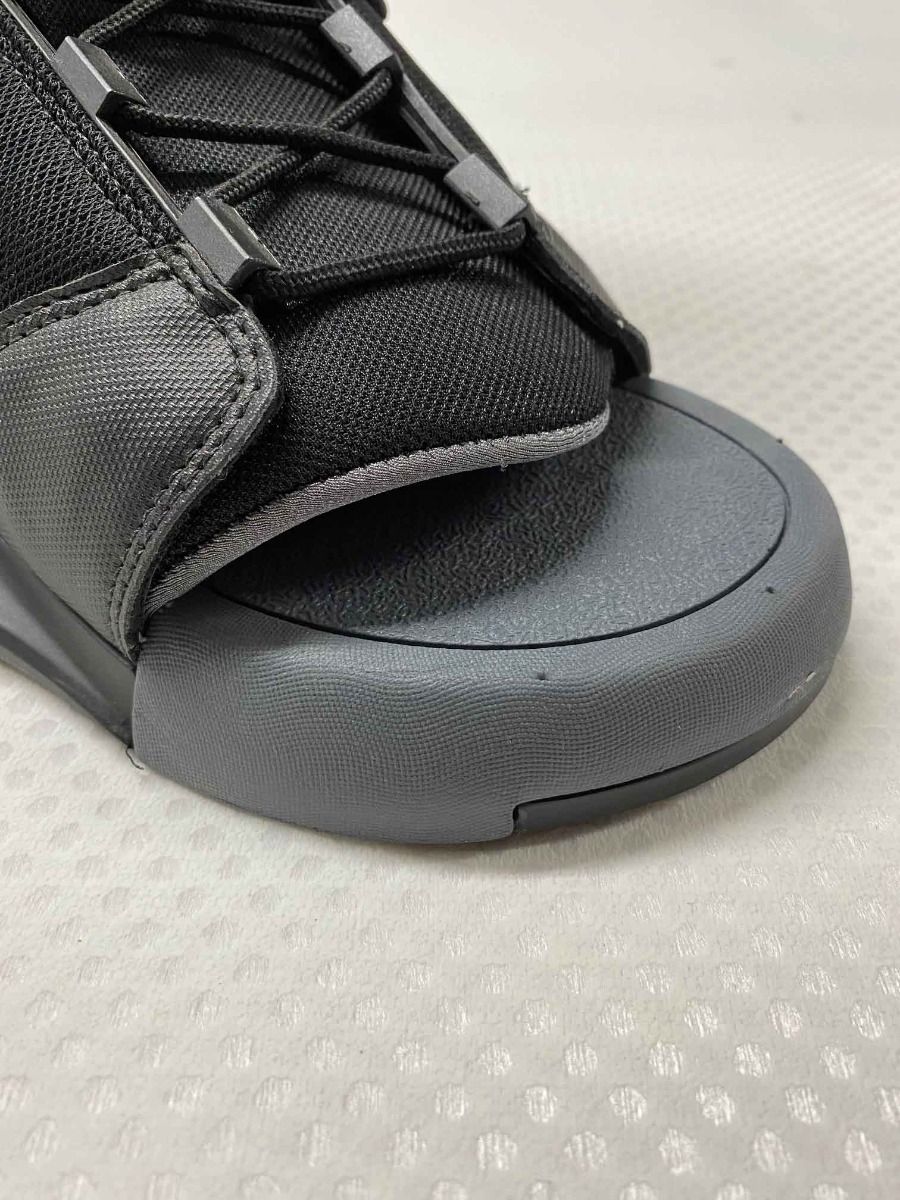 This is fantastic for those looking for bindings to share with friends and family, or perhaps in the case of juniors with growing feet. Bigger feet simply protrude further from the binding but it is important they do not pass the binding footbed and hence why all brands suggest maximum upper size ranges. So what makes one open toe boot superior to another? Put simply, board control. As we move up the range of open toe boots the foot is more tightly held in the boot. This can be through ankle shaping, overall boot height or the efficiency of lacing method. In addition, mid range models upwards will be ‘baseless’. This means that only a thin sheet of foam separates foot and board, sitting the rider close to the board and creating the ultimate connection. 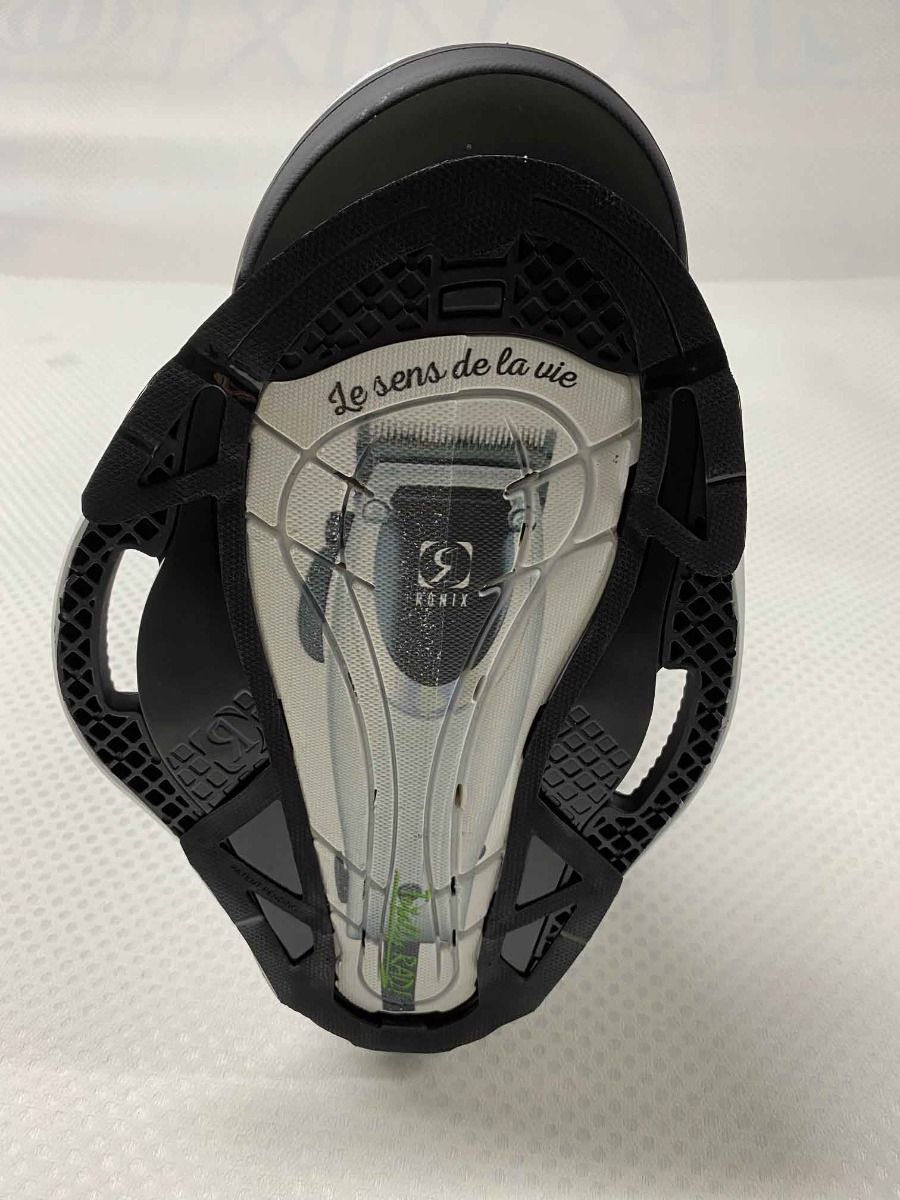 * A baseless boot.  The white foam separates foot and board.

As a result of these factors you will find that entry level open toe bindings allow a large size range.  In contrast, top end models may only offer 2-3 foot sizes due to the precision of fit. The general rule is that it is better to be at the top end of a size range as this will ultimately give a snug fit and great control over the board. The price range of open toe models will range from £100-300.

Closed Toe - As the name suggests these are the performance cousin of open toe bindings and do no allow the toes to protrude, therefore looking more akin to normal footwear. 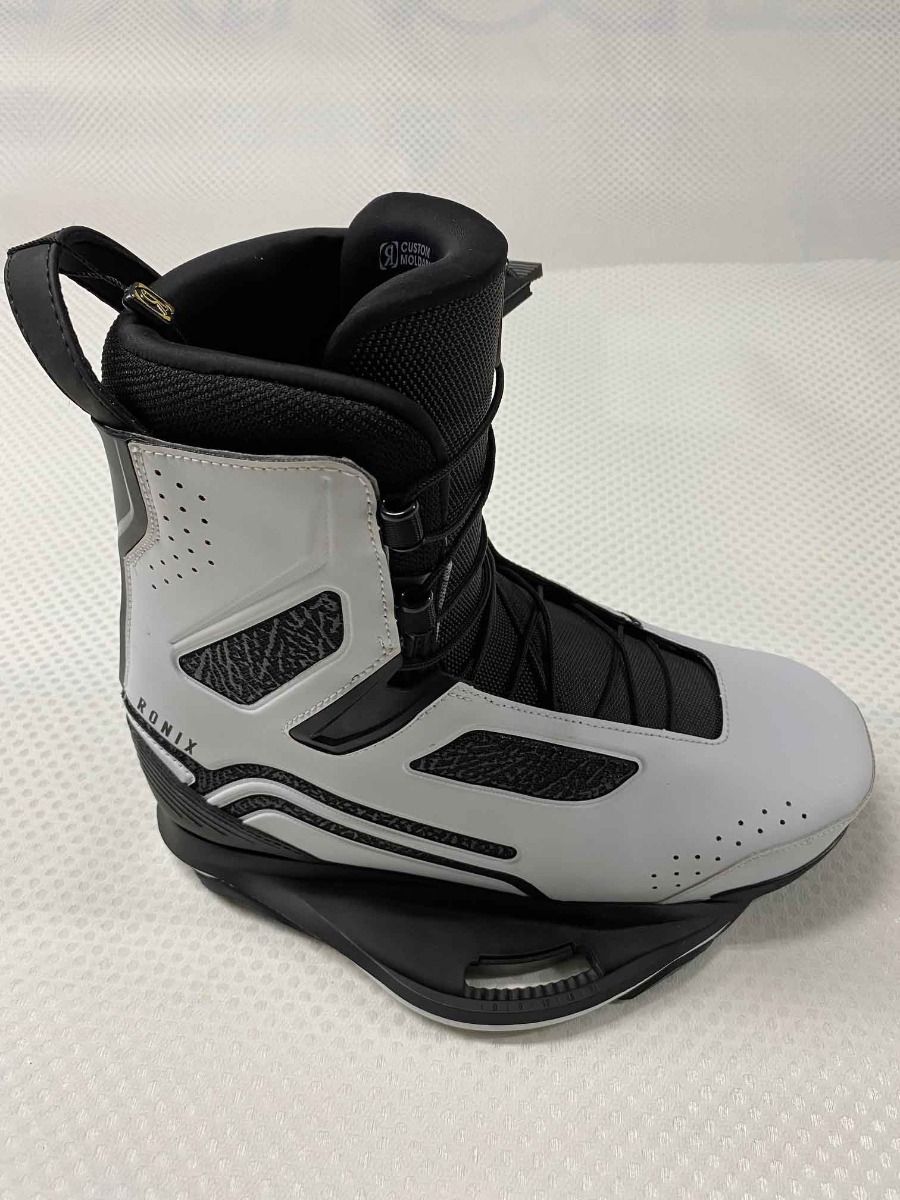 The reason for entirely encapsulating the foot is all about board control.   Any movement of your foot in a binding ultimately leads to a lack of board control. The main piece of movement we wish to stop is the heel lifting from the boot base. In any open toe model it is possible for this to occur given your foot is able to slip forward, leading to room in the heel. This is fundamental with open toe but can be reduced, if not eliminated, in closed toe models that fit well. The boot should be a snug fit and toes must ‘feather’ (graze) the end so as to ensure no potential for the foot to slip forward as outlined above. Were your trainers to fit like a wakeboard boot you would be unlikely to purchase and this is why taking advice on the correct fit is critical. Many of our customer consider a boot too tight when in reality it is perfect. To further complicate the issue many boots are made from heat moulding foam and will ease off over time. The most famous of these liners is the Ronix collaboration with intuition liners, widely regarded as the most premium heat moulding foam on the market. Whether you choose to heat mould your boots is a matter of personal preference and although we have the facility in store our general advice would be that you allow this process to happen naturally. In doing so the foot is correctly located and pressure identical to your style of riding, rather than attempting to force this in store. It is also important to release that to heat mould is not a now or never moment and boots using these liners can effectively be reset to factory shape at any stage.

The liner material and shaping is largely what determines the quality of closed toe models, with differing densities affecting whether a boot is a stiff or soft flex. Due to the performance nature of this category all will have aggressive angle shaping and dual zone lacing system. Almost all models are baseless so as to create the ultimate feel between foot and board. One desirable trait is for the chassis of the binding to be stiff, thereby improving the direct connection between rider and board. Ronix in particular is worth highlighting here as their ‘brainframe’ construction has been revolution in the market and simply putting one of their bindings on a board along with alternative brands shows the lack of flex the Brainframe system creates. If you are looking for a binding that is super lightweight, beyond comfortable and performs with the best then Ronix might well be the brand for you.

A discussion on the Liquid Force wakeboard bindings range is also noteworthy in regard to their 4D and 6D bindings. Like Burton in snowboarding Liquid Force has introduced a track system into many of their boards. They feel this offers greater levels of binding adjustment, as well as letting their cable boards flex without the restriction of traditional binding inserts. 4D binding models were designed to work specifically with this model to produce the ultimate connection, arguably being akin to the aforementioned Ronix Brainframe models. 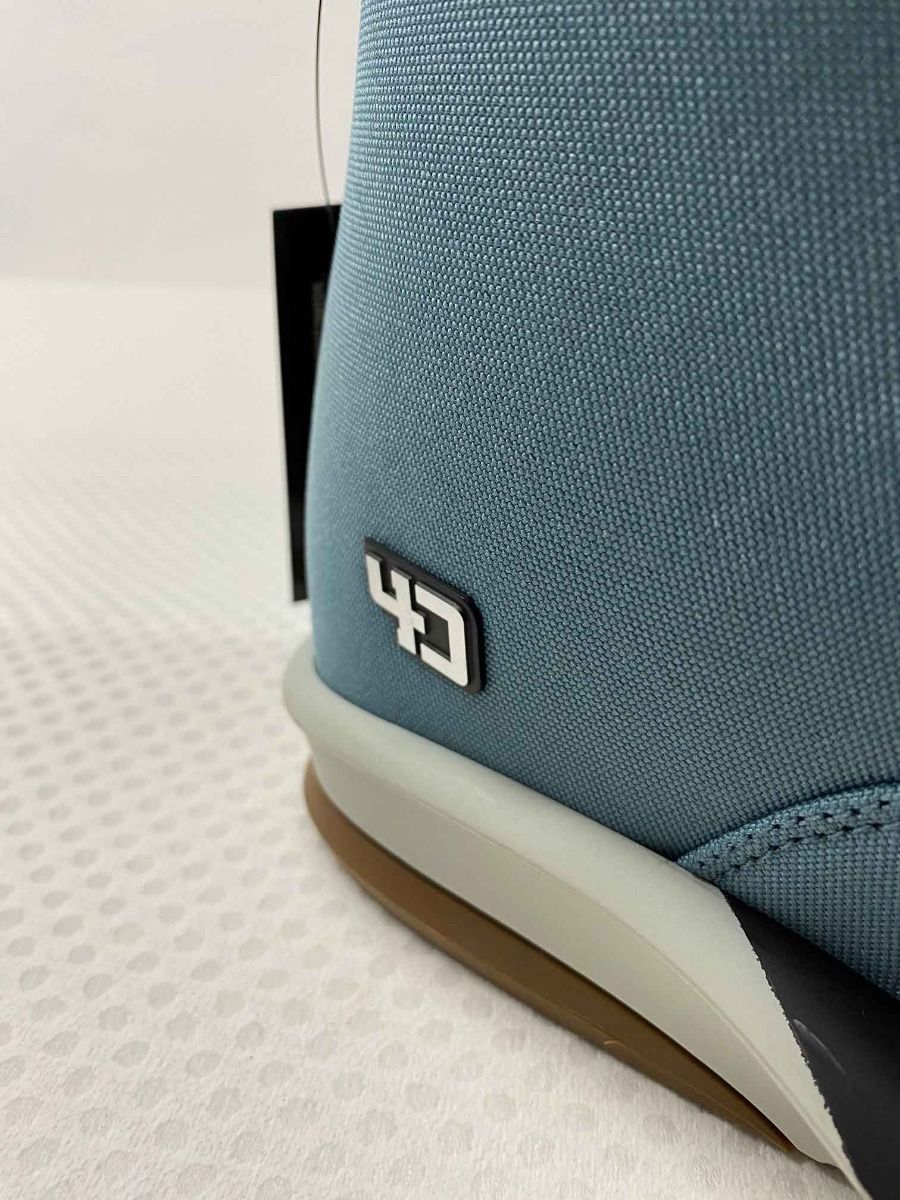 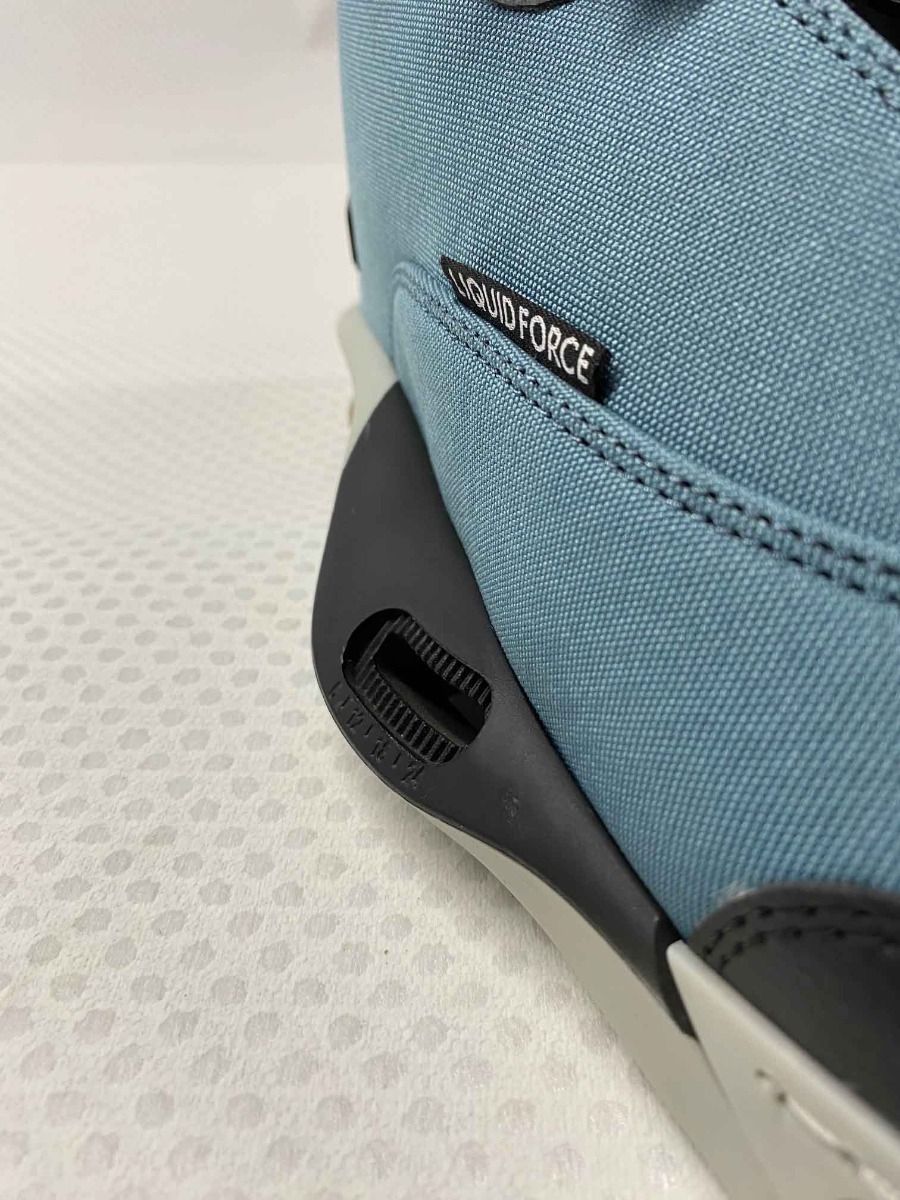 *Liquid Force 4D - screws enter at 45 degrees for a tighter connection to your board.

However, be aware that unlike the case with Ronix the Liquid Force 4D models will only fit channel fitting boards. As a result of many riders using non channel boards wanting Liquid Force bindings the brand have produced a range fo 6X models. The great news is that these offer many of the benefits of 4D but now work on any board brand and model.

The only other factor worth mention in regard to closed toe bindings is the introduction of ‘walk liners’.   When riding cable parks there is much displeasure when walking back to the dock barefoot on cold days. Similarly, the concern about glass and sharp obstacles under water has always been an issue when not wearing any protective footwear. The Hyperlite system discussed later in this guide was partly in response to these concerns. However, in recent times all brands have developed traditional closed toe models which feature a removable liner that can be worn in isolation when walking back after a crash. When designing the challenge is always how chunky to make the sold. Too thin and comfort and durability is compromised. Too thick and board feel is compromised. 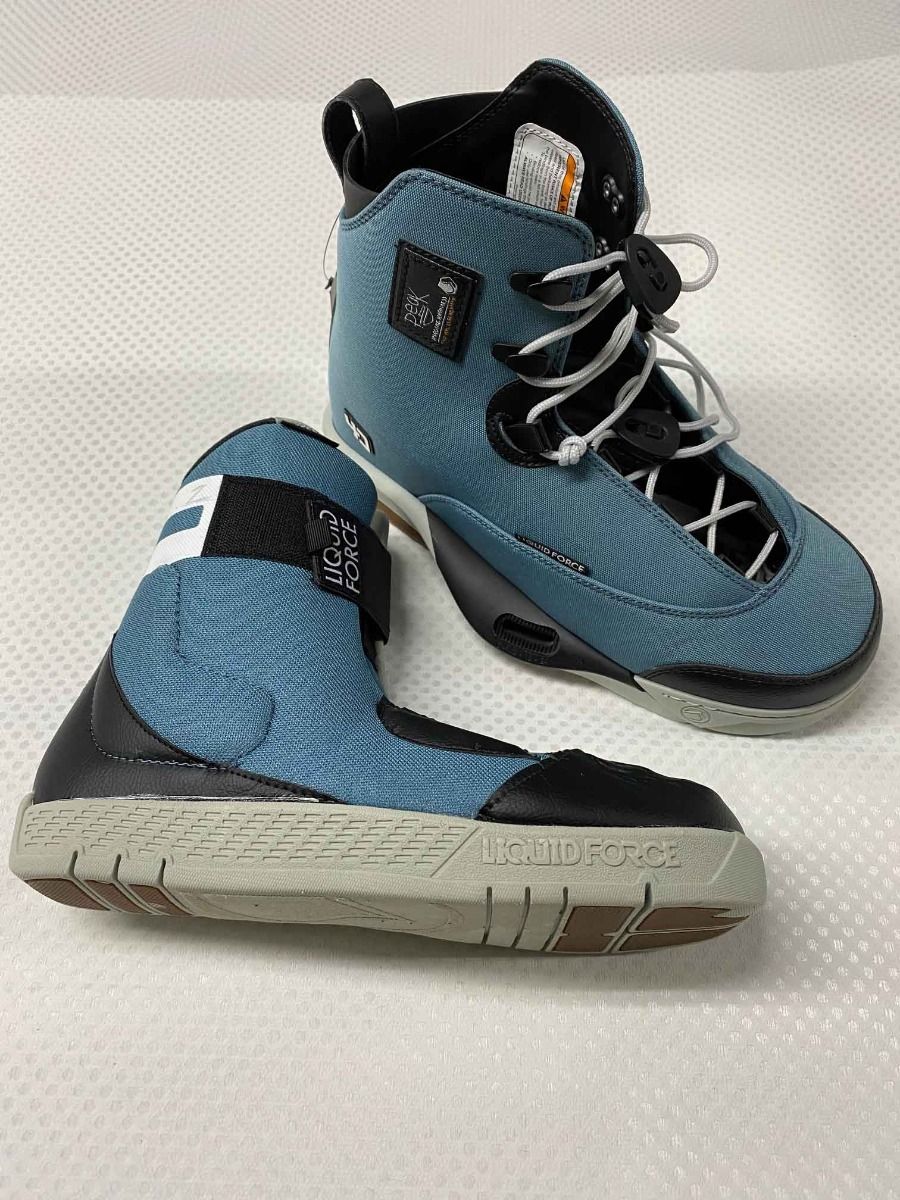 Following this discussion on traditional bindings, both open and closed toe, we will now cover Hyperlite’s System combo.

In many ways wakeboarding can be seen as snowboardings summer brother and thus it was arguably logical that at some stage a brand would investigate the potential to separate the binding into two component parts, the boot and chassis. The obvious benefit to this is when walking back to the dock after falling at the cable park. This is both in reducing the cold but also to protect the feet from sharp obstacles both in and out of the water. 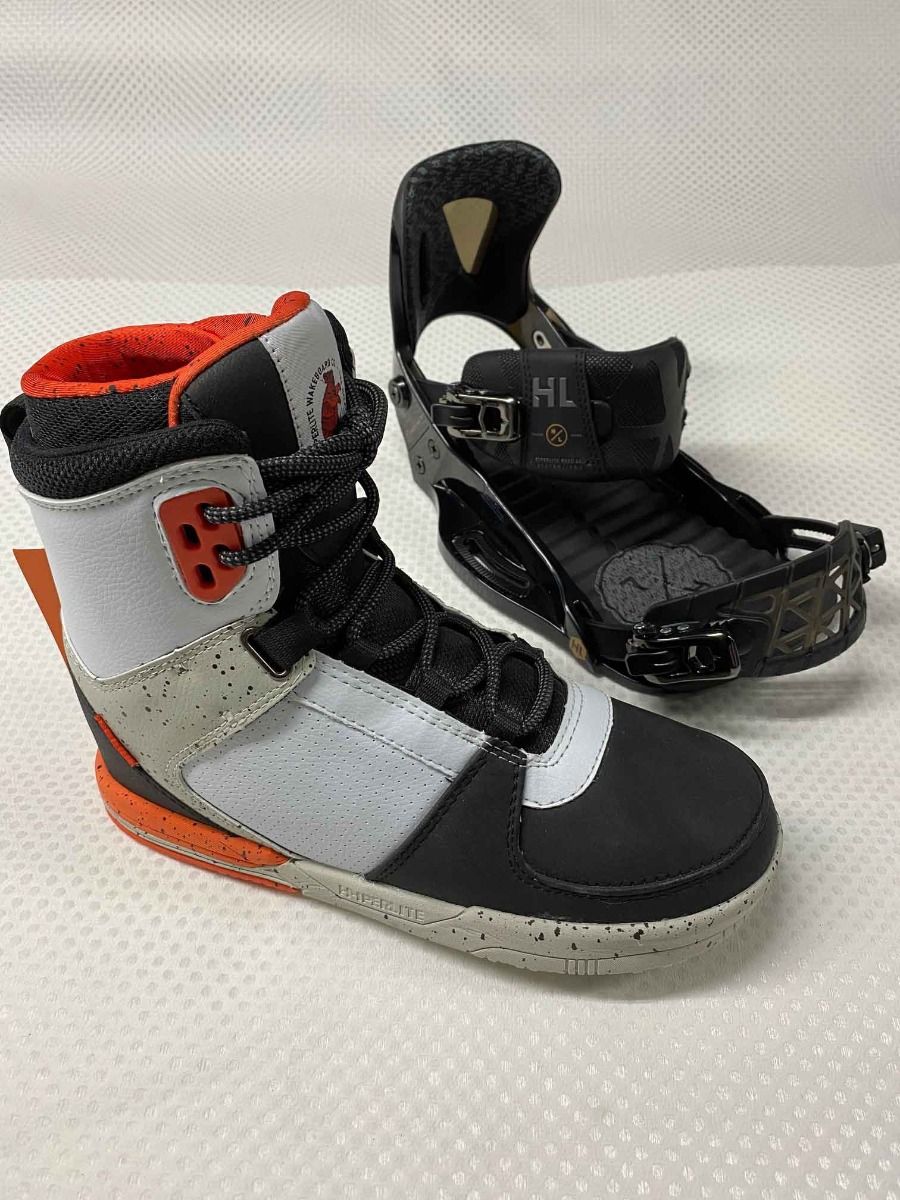 The concept of separating the binding and boot has another benefit in that you have the control from the boot that is furthered by that of the chassis. The ankle straps is particularly noteworthy as it is this pivot point that creates most response over the wakeboard.

Hyperlite produce various wakeboard boots that offer differing flex levels and lacing methods and thus there is an option to suit any rider. There are also two style of chassis, one with high back and one without. The former hugs the back of your foot and offers additional control. In contrast the ‘lowback’ style was developed as a result of direct requests from the team. It allows the boot to flex much more and thus is ideal for those who prefer a soft and relaxed feel in their bindings. 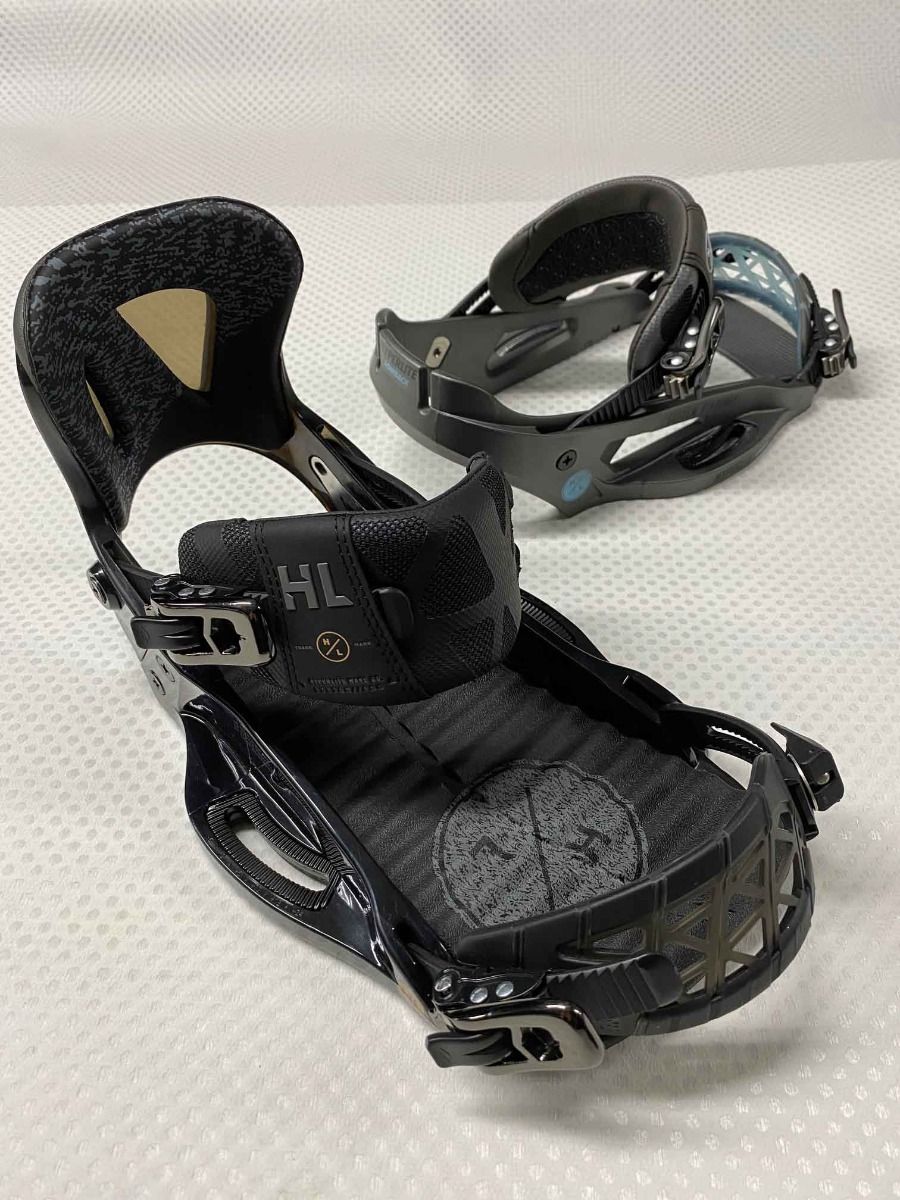 We hope you found this guide useful in selecting your next pair of wakeboard bindings. Rather than discussing specific models at length we thought it more useful to provide information that is broader in scope and can be applied to any brand. However, it should never replace our expert advice and thus why not get in touch with our staff for a binding recommendation to suit your scenario and requirements.