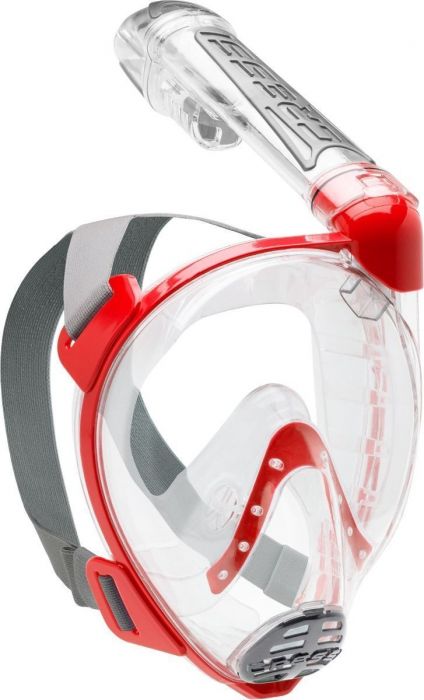 The Duke is a full-face mask (FFM) and it is designed to give the user the opportunity to breathe easily.

Obviously, it’s not the first of its type. In fact, we could say that Cressi’s Medusa mask was the first FFM but it didn’t separate the breathing chamber from the vision chamber.

Cressi owned a patent for the Medusa mask.

What else makes our mask different from all the others? And how does the Duke allow the diver to breathe freely and also expel CO2 build-up and not fog up the vision chamber?
These three features put Duke in a class of its own:

The reason why we have chosen to position the tube laterally is that it is the shortest route possible for airflow with minimal effort. And this is currently under patent.

Its left-side tube is divided into two before entering the two separate chambers.

One is connected to the breathing chamber and the other is connected to the vision chamber.
This advantage is enhanced by the fact that neither the breathing chamber nor the tube have any valves to impede the user’s breath.
What’s more, the extraction chamber has an enlarged volume in order to allow for optimal CO2 extraction.
Something interesting to note is, this airflow system in Duke produces far less co2 build-up than a safety gas mask.

We had the opportunity to test it in the laboratory of Milan polytechnic’s engineering department where the results were beyond our expectation.

The second independent tube. It’s connected to the vision chamber and extracts moisture and warm air that builds up in this chamber, completely separate from the breathing chamber.

Duke has a deflector, which is also under patent, which maximizes the extraction of warm air produced by the face when the mask is worn, and it is designed to work like a chimney effect forcing air circulation away from the lens.

Finally, Duke has large outlet valves at its base, to drain the mask quickly& easily if it fills up with water.

One large outlet valve below the mouth which has nothing to do with the breathing system.